Recession is the only ‘easy’ option for the US Federal Reserve (FED).

Markets have been expecting further rate hikes from the FED since the release of US inflation data for September. Investors expect interest rates to remain at 4.90%. This is approximately 25 basis points higher than earlier expectations.

The magic is 5% interest

Will the Federal Reserve significantly exceed the 5% threshold? We don’t think so. Recent developments, including in the UK, show that at 5%, things are starting to break down. Not least because it was the fastest rate hike cycle since the 1980s.

The housing market was the first sector in the US to break the 5% interest rate. Some may move with a 30-year mortgage rate of 7.20%. An increase of 400 basis points in nine months! This has frozen the US housing market. But with inflation stubbornly high, it’s only a matter of time before American consumers stop moving and stop spending. 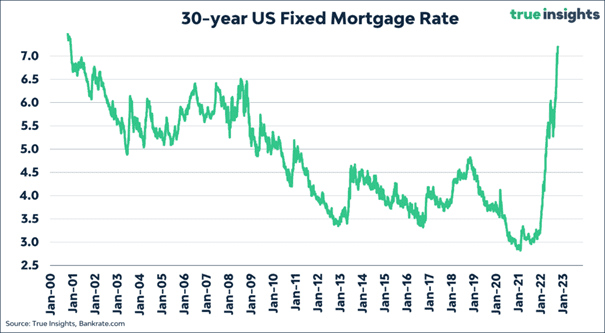 This would provide the only easy way out of the Federal Reserve’s profit cycle. During a recession, prices fall quickly and at least some of the potential for inflation disappears. As several FOMC members have suggested, a recession allows the Federal Reserve to take a more wait-and-see stance on rate hikes. 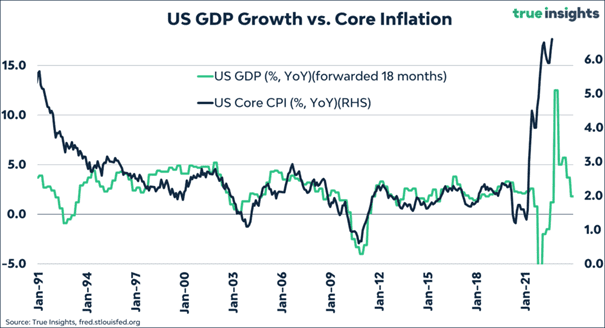 Is Recession Too Late?

A US recession is far from providing the Federal Reserve with a means to halt rate hikes. Since April, the 2-year interest rate in the US has been higher than the 10-year bond rate. Often a sign that a recession is about to follow. However, it takes an average of 19 months from when this point is reached. Looking at the difference between the 10 year interest and the 3 month interest it appears that there is still no upside. The chart below provides an overview of both interest rate differentials and the time between them until a recession occurs.

A quick slowdown is needed to open the door to a quick end to Federal Reserve rate hikes. From the view of the above scenes, this is not obvious. Markets seem to be predicting a peak in the federal funds target rate of 4.90%, which doesn’t look aggressive given Powell’s continued hikes into March. However, we think the threshold for raising interest rates above 5% is high as things break down and risks to the financial system increase. will continue.