Ukraine says Russia is moving new units to Kherson and strengthening its positions. According to Kyiv, these preparations show that the Russian army wants to defend the coastal city and has no intention of withdrawing.

Kyiv says last week’s messages will not deceive it that Moscow will avoid a battle for Khersonn. For example, units in the northwest of the province will withdraw from the advancing Ukrainian army, which has been on the offensive for weeks. The Russians are also evacuating tens of thousands of residents from the city.

The head of Ukrainian military intelligence, Major General Kirillo Budanov, said that all indications are that the Russian army is preparing to repel an attack on the city. “They create the illusion that everything is lost,” Budanov told the Ukrainian newspaper. Ukraine Pravda About the image that the Russians want to preserve. “But at the same time, they are bringing in new military units and preparing to defend the streets of Kherson.”

Since the new Russian commander of the invasion force, General Sergei Surovkin, publicly acknowledged last week that the military situation in Kherson was “difficult,” there has been speculation that Moscow might want to abandon the city. That would be a great humiliation for the Kremlin. Kherson is the only major city occupied by the Russians.

Also the massive evacuation of the population and the Ukrainian accusation of it The Russians placed explosives in the Nova Kachovka damnortheast of Kherson, appears consistent with reports of a possible Russian withdrawal to the east bank of the Dnipro River.

In response to Surovkin’s striking words, the US Military Research Center, the Institute for the Study of War, concluded that “this likely indicates that the Russian authorities are seriously considering a major withdrawal.”

According to the head of intelligence Budanov, information from his service shows that the Russian army did not put enough explosives in the Nova Kachovka dam to completely detonate it. With the sum put, the road at the dam could only be made impassable for the Ukrainians if the Russians pulled out. The dam is located seventy kilometers from Kherson.

The battle at the dam continues unabated. A video posted on social media on Monday shows Russian units in a nearby factory being bombarded by Ukrainian artillery. It may have been a US HIMARS missile attack. The Ukrainian army has used these high-precision missiles to advance towards Kherson in recent months with great success.

If Sorovikin and the Russian high command decided to withdraw across the Dnipro River, perhaps after heavy fighting in the city, then an organized withdrawal across the river would be a difficult process. There are approximately 20,000 to 30,000 Russian soldiers in and around the city. It would be difficult to get this army as well as equipment unharmed across the river, which is estimated to be one kilometer wide. The Ukrainian army made all major bridges over the Dnipro River impassable with HIMARs missiles.

Withdrawal from Kherson is possible only via a temporary bridge that has been next to the Antonovsky Bridge, which has been damaged since last week, and by ferries. The British Ministry of Defense also reported on Saturday that the Russians are continuing to reinforce a number of crossings to allow the withdrawal across the river.

Looks like the Russians have finished building a barge bridge over # Dnipro near # Kherson during the past 24 hours. Images from October 18 show a barge pushing the last parts into place at 0814 UTC. This allows Russia to resupply faster or evacuate quickly. It’s also an easy target pic.twitter.com/MKbRu1RzPV

According to the British, the fact that civilian barges must be used for the construction of the temporary bridge is another indication that the Russian army also lost a lot of equipment and experience in this area, such as pontoon bridges, in the Eight. The months the war has now continued. “Russia has lost large amounts of military equipment to cross rivers and many engineers since the invasion,” the ministry said, citing information from British intelligence.

The temporary bridge is a major target of Ukraine, but Kyiv has not yet bombed it on a large scale. An airstrike was reported last week, but the bridge was not damaged beyond repair. This indicates that the Ukrainians still want to offer the Russians an escape route, should Moscow decide to withdraw.

See also  US, UK and Australia sign new military alliance to 'arm themselves against challenges of the 21st century' | Abroad 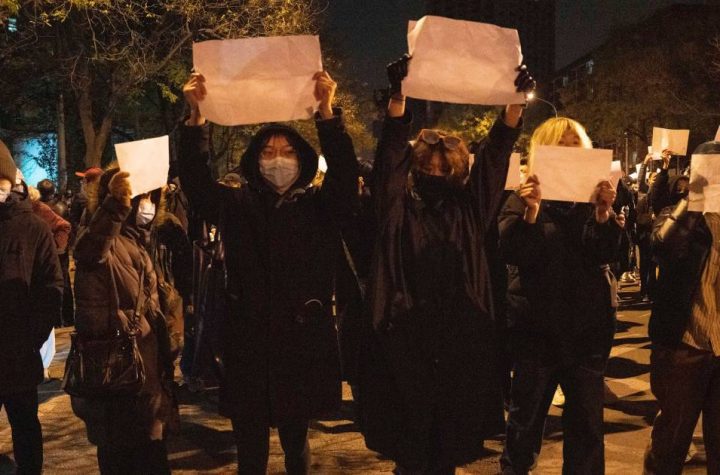 As China eases Corona restrictions, its grip on protesters is tightening | Abroad