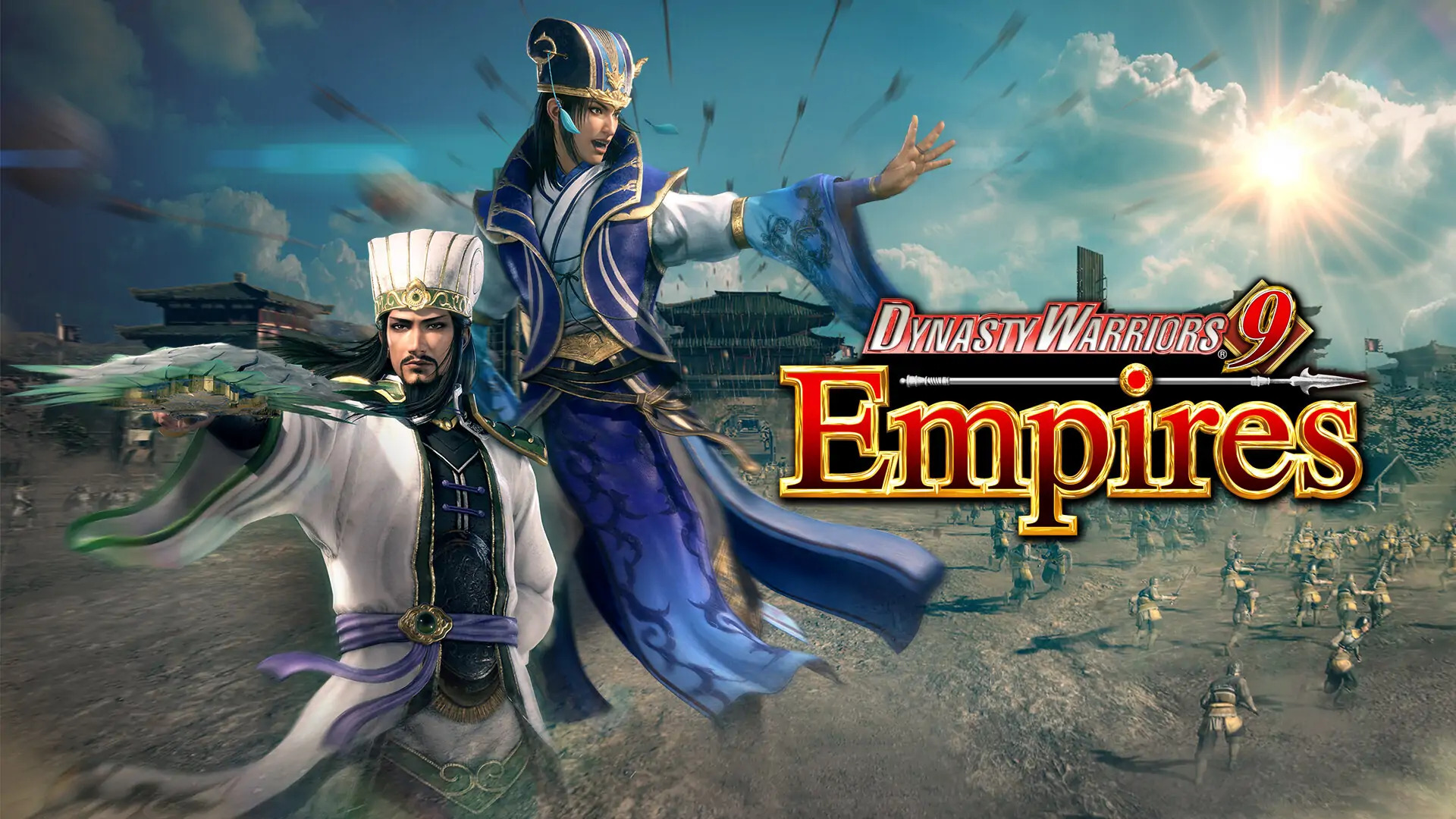 review | Empires of Dynasty Warriors 9 – Dynasty Warriors 9 wasn’t exactly a hit: the gameplay wasn’t grainy, and the performance was nothing to write home about. We won’t be spending any longer than necessary, so there’s all the more reason to immediately consider a new type of game. Dynasty Warriors 9 Empires is in the midst of us and we’ve taken a closer look at this game. Especially the result of the previous “accident”, we view this match with suspicion. And while we were already working on the game, we wondered why we bothered to review this in the first place. It seems as if the developers didn’t bother making something decent out of the previous mess. Dynasty Warriors is not what it used to be and we’ll explain why here.

The game is a game, in short, you alone can face thousands of soldiers simultaneously with crazy and elegant combinations. A concept that makes Dynasty Warriors very special and in the case of Dynasty Warriors 9 Empires, an element has been added. Empires suggests an additional strategic aspect, which we’ll go into in more detail in a moment. The theme across all Dynasty Warriors is basically the same: based on the bloodiest period in Chinese history that also inspired a novel like The Three Kingdoms. The game takes this novel as the basis for completing the story. With so many wars, it is an interesting topic par excellence to be inspired by so many other games. Hence, in this case, the Dynasty Warriors franchise is almost 20 years old and people still never get bored of this topic. As the book’s title makes clear, it is about three kingdoms: Shu, Wu, Wei, and multiple factions vying for complete power in China. 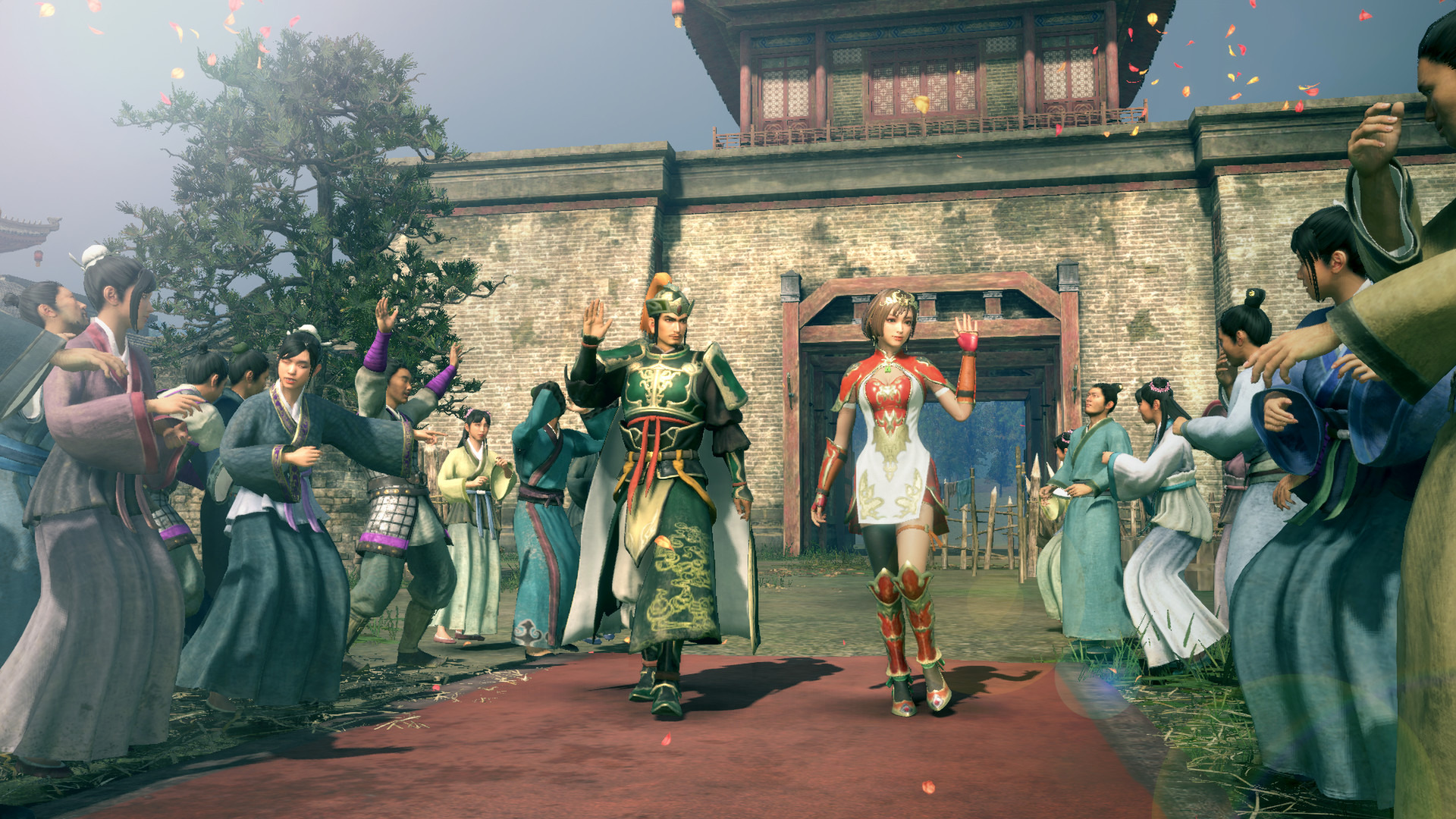 This is actually the goal of the game. In addition to the tutorial and edit mode (create your own man), the Conquest mode takes center stage in this meager list of modes. Here you choose different versions of China, each set in a different time period. These ‘levels’ (a total of 8) differ in the current parties you will be competing against. Think of the Yellow Turban Rebellion, the alliance against Dong Zhou, but also the northern campaign where the Three Kingdoms are diametrically opposed. It’s a great way to start opening, but it practically doesn’t really matter what you choose. In empires, it is important not only to wage wars on the battlefield (Moso part), but also to make political preparations and get things done well. In practice, this means nothing more than a large number of screens that you have to click on. It is basically following the blue icons that indicate what is important to get to the battlefield.

Dynasty Warriors 9’s big open world in Empires this time around is a barren, soulless, and uninspiring arena where you can hardly do anything. Anything you can quickly tap through the menu screens, you can also do in the open world. So you can choose to do it through the lists or actually try it out in the world, albeit in a limited form. This is mainly limited to talking to people or slaughtering some tigers, wolves and bandits. You are doing it with a very bad pretext that it should represent vast natural areas. Traveling from one place to another takes a long time and has no purpose: it does nothing but waste your precious time. So yeah, it’s better to tap on some screens, because it brings you (repetitive) gameplay faster. Oddly enough, the idea could be called interesting on paper, but nothing of the detail adds anything or is intriguing. At least on the battlefield we could still sow some death and destruction, and although it could be described as catastrophic in itself, we still managed to have some form of fun here. 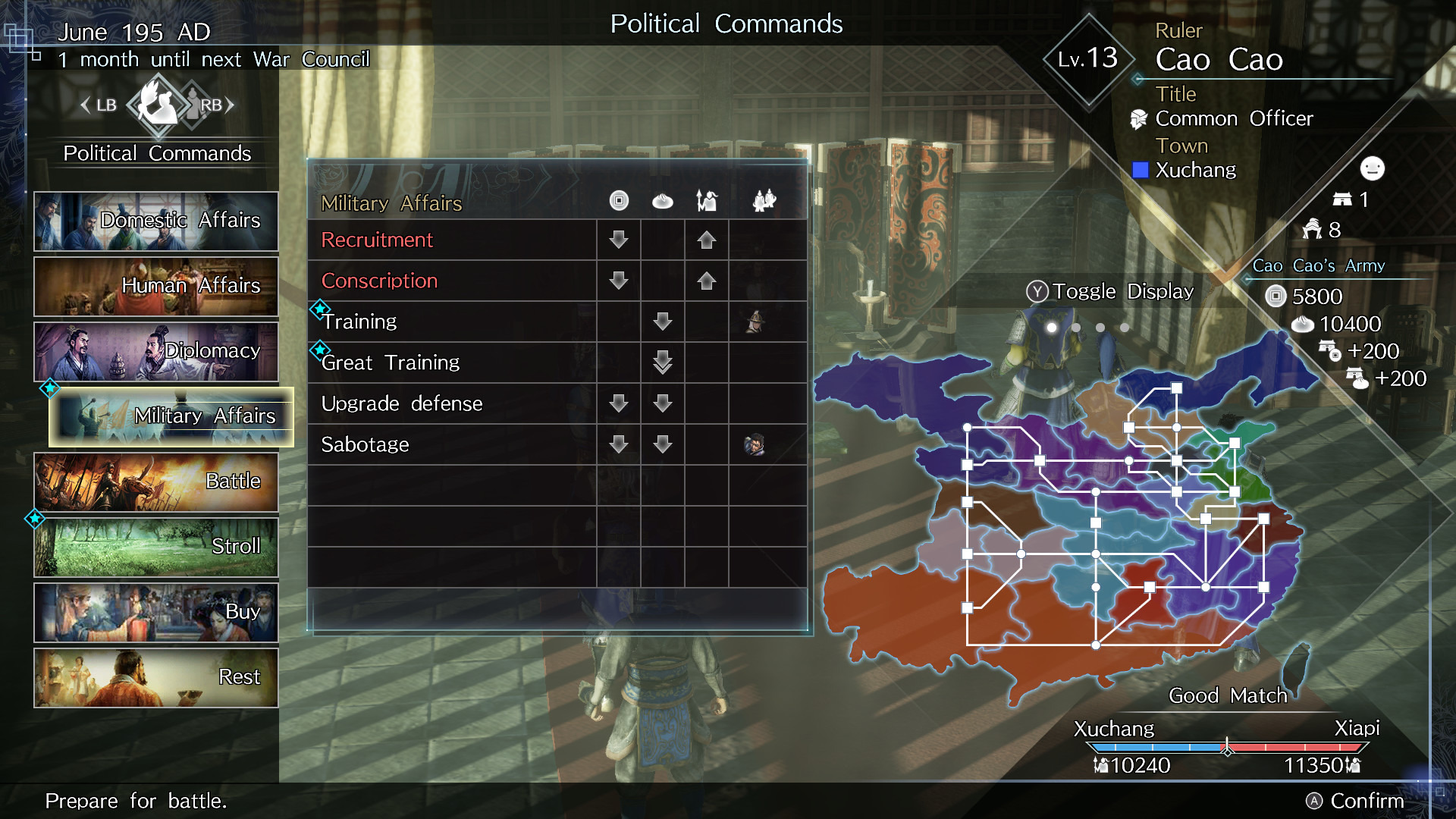 With so many different generals, you might think there’s a lot of difference to this one, but this one is disappointing. Lu Bu or Wei Yan both have nice move combos, but the vast majority have similar attack patterns (although of course that’s franchise-specific as well). However, you can go ahead with it. This is because the gameplay works. You can drag long combos using the flip buttons, you can launch a moso attack using the circle button. Your strongest attack, as it were. In addition, you can combine all these basic attacks with R1, in order to use special variants. Some cards, which you can assign to each of the arrow keys called secret plans, allow you to use special abilities with the L1 button. Consider blasting a lot of fire, lightning or ice in your area, giving yourself health, granting attack buffs, etc. Mixing all this up a bit leads to fun hacking and entertainment wreckage. Secret plans of the same name (it seems that the developers are so lazy that they chose a double name) are also additional tasks that you can perform on the battlefield, in order to gain the upper hand. Anyway, it lets you run around the field purposefully.

What’s so boring here is the ramshackle, rotten quality of the game. With the option to choose a better resolution or performance, we naturally chose additional frames per second on the image. While the resolution appears to be in 4K, the frame rate is just a drama. It’s now 2022 and Koei Tecmo has managed to create graphics similar to those of PlayStation 3 games. What’s worse, they still can’t reach a steady 60fps. The developers may not have been aware of the lighting concept or any kind of surrounding blockage either. Or what do you think of the term “HD materials”, they apparently don’t know that either. The game is a disaster in terms of graphics, and the constant screen tearing definitely doesn’t help. Meanwhile, the game is available on PlayStation Store for €69.99… 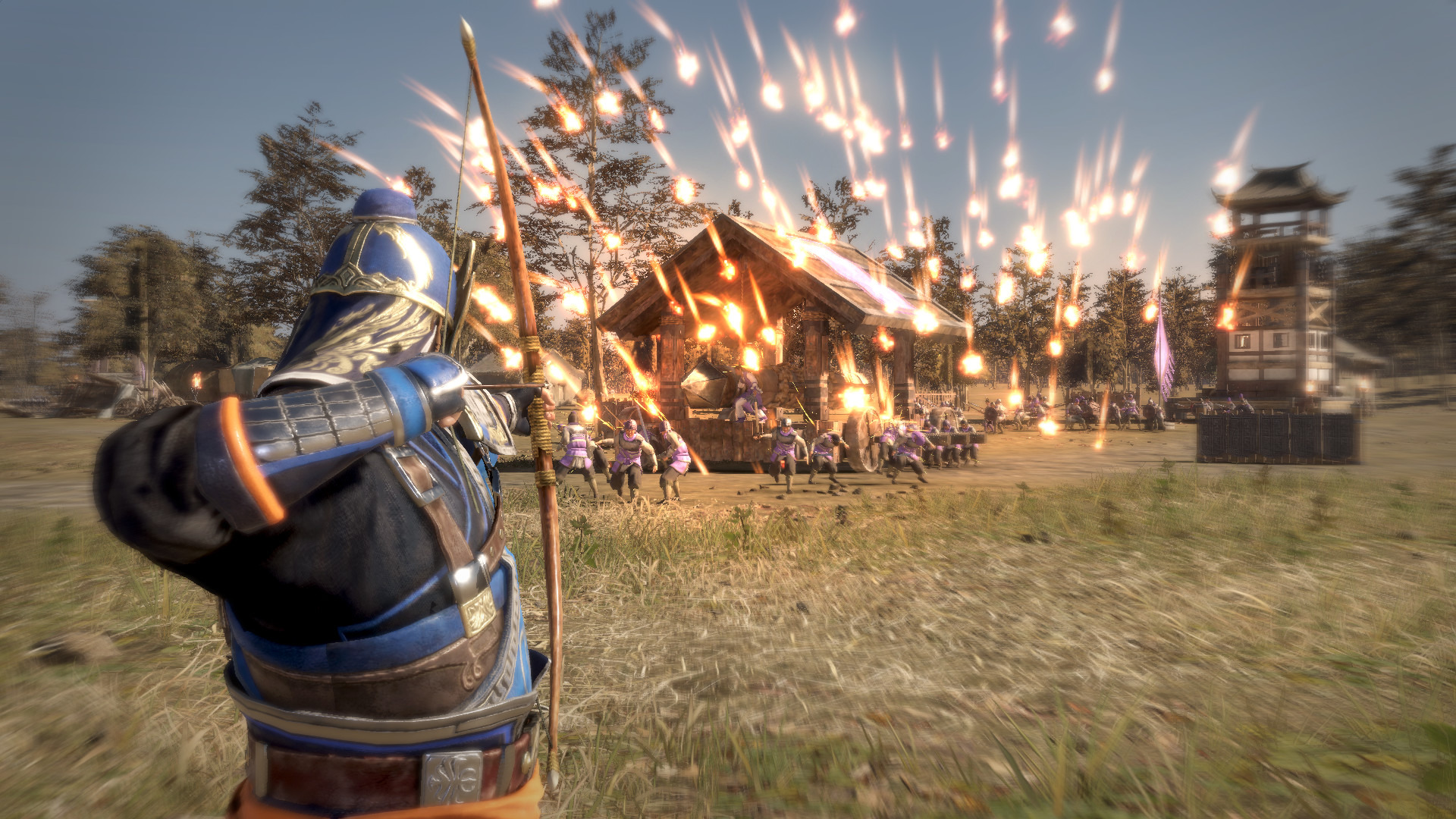 It just gives you a headache. Maybe our TV now also needs an exorcist, because we haven’t had much screen tearing in two generations of games. Although it’s also out of the question, we can still understand the frame drop from time to time, especially considering the number of soldiers on screen. But doing it in your own movie scenes is almost a talent in itself. This title does not apply to graphic prowess, performance care, or the effort of a little polishing within the game. So the open world is also an area thrown in the hat. Popups that don’t make you happy, ugly plants and animals…don’t bother. The point we’re trying to make here is that some PS3 games today are made more carefully with graphics.

If developers don’t have the dignity to offer a neat product, why do gamers bother to invest even a second in this. Dynasty Warriors may have a recurring gameplay concept, but it’s a beautiful franchise. Unfortunately, with Dynasty Warriors 9 Empires, it’s once again clear that things aren’t going in the right direction. The basic quality of the game is simply below average, even compared to games from two previous generations. The concept that Dynasty Warriors 9 Empires is trying out here is very interesting on paper, but it’s a shame practice shows us that it’s nothing more than tapping on screens. However, it is crazy to say that the gameplay on the battlefield can actually be quite entertaining, because it plays great and above all fun. Wei Yan was our favorite and we recommend this year to anyone who wants to try the game. However, these will be few. Poor Wei Yan…