This is not an ethereal spectacle of forgotten tombs. And these soot-filled fingers do not extend. Filled with gas and dust, these plumes “bury” slowly forming stars over several millennia. The NASA/ESA/CSA James Webb Space Telescope captured this frightening, dust-filled image of the Pillars of Creation in mid-infrared light, a fresh look at a familiar landscape. Why does mid-infrared light evoke such a dreary, eerie mood in Webb’s Mid-Infrared Instrument (MIRI) image? Interstellar dust covers the scene. While mid-infrared light specializes in dust details, stars at this wavelength are not bright enough to be visible. Instead, these columns of lead-colored gas and dust sparkle at their edges, betraying the activity within.

Thousands of stars formed in this region. This becomes apparent when examining Webb’s recent near-infrared camera (NIRCam) image of this object. Most of the stars are missing from the MIRI image. why? Many newly formed stars are no longer surrounded by enough dust to be seen in mid-infrared light. So Meri could see the young stars who had not yet rid themselves of the dust mantle. These are the scarlet orbs on the edges of the pillars. On the other hand, blue stars are aging, which means that they have rid themselves of most of their layers of gas and dust. The mid-infrared light excels at detecting gas and dust in the smallest detail. This is also unmistakably clear in the background. The densest areas of dust are the darkest shades of gray. The red area on top, which forms a strange letter V, like an owl with outstretched wings, is where the dust spreads and gets colder. Note that no background galaxies are visible – the interstellar medium in the densest part of the Milky Way’s disk is so full of gas and dust that no distant light can pass through it.

How vast is this landscape? Follow the top pillar and land on the bright red star that sticks out like a broomstick. This star and its dust are larger than our entire solar system. This scene was first photographed by the NASA/ESA Hubble Space Telescope in 1995, and again in 2014, but many other global observatories have looked deeply into this region, such as the European Space Agency’s Herschel telescope. Each advanced tool provides researchers with new and exciting details about this region, which is practically overflowing with stars. With each observation, astronomers gain new information and, through their ongoing research, build a deeper understanding of this star-forming region. Each new wavelength of light and each new instrument provides increasingly accurate information about gas, dust and stars, allowing researchers to fine-tune their models of star formation. Thanks to the new MIRI image, astronomers now have more high-resolution mid-infrared data than ever before, and will analyze more accurate dust measurements to create a more complete 3D view of this remote region. 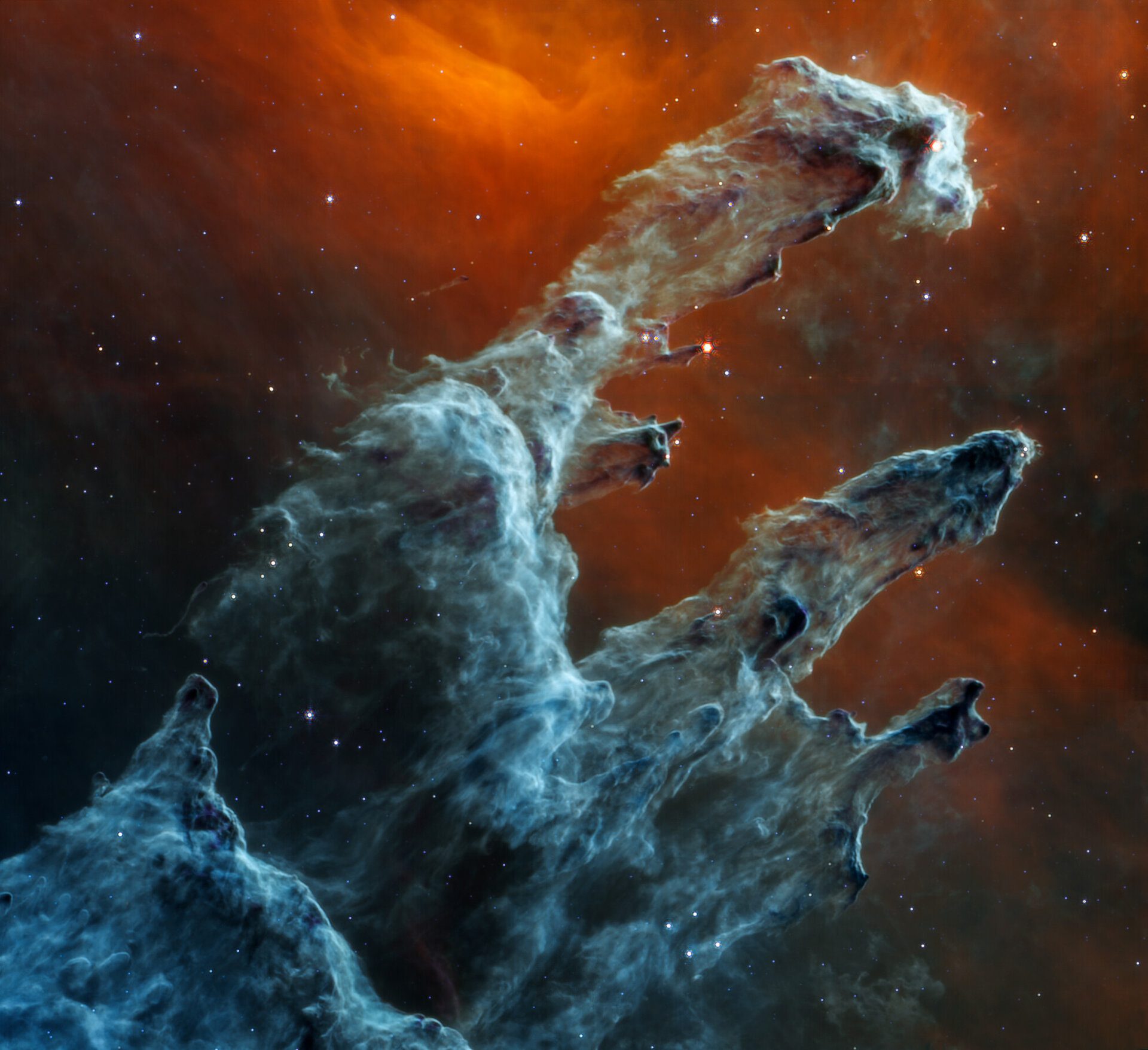 The pillars of creation lie in the vast Eagle Nebula, 6,500 light-years away.

Webb is the largest and most powerful telescope ever launched into space. Under an international cooperation agreement, the European Space Agency provided the launch service for the telescope, using the Ariane 5 launch vehicle. Working with partners, ESA was responsible for developing and qualifying Ariane 5 modifications for the Webb mission and purchasing the launch service by Arianespace. ESA also supplied the NIRSpec spectrometer and 50% mid-infrared MIRI instrument, which was designed and built by a consortium of nationally funded European Institutions (MIRI European Consortium) in collaboration with the Jet Propulsion Laboratory and the University of Arizona. Webb is an international partnership between NASA, the European Space Agency and the Canadian Space Agency (CSA).