Writer Koos Meinderts and graphic artist and illustrator Annette Fienieg have set up their workshop and shop at 23 Professor Adolf Mayerlaan for more than fifteen years, making and selling their work there. They say they are the only shop left in Twendorp. You can go there for self-written and illustrated books, hand-printed T-shirts and baby bags, and also for illustrations and prints.

Annette and Koos department store is a few minutes’ walk from Overvecht station. There is a sign in the front yard, so people know it’s open. In front of the window are, among other things, self-designed Christmas cards and a number of books – written by Koos, and drawn by Annette. Inside there is a large wooden table, cabinets with books and all kinds of colorful prints on the wall. Annette’s large engraving press in the back of the room is not to be missed. She uses this to make all of her stencil prints.

The store is open at unspecified times, but by appointment or simply by ringing or ringing the bell. “When we both work here, we put the sign outside,” Koss says. “Then they know we’re there.” The two are husband and wife and have almost always worked together. “We were neighbors in my student house when I was still at the academy,” Annette says. I even made it clear to earn some extra money. Koos already had a few editorial assignments here and there. “Then he let me do the illustrations.”

Annette did not train as an illustrator, but as a graphic artist at the Academy of Visual Arts in Utrecht. In addition to her work as an artist, she has drawn over eighty children’s books to date. Koos has always written, but he never thought it would become his profession. He now has more than fifty titles to his name, including children’s books, youth novels and books for adults.

He has won numerous awards and has translated a number of books, including into German, Spanish, Korean and Chinese. his youth novel look at the sea He got the Lion’s Book, and he got the Gouden Griffel for to the north Together with Harrie Jekkers, he won the Annie MG Schmidt Award for their song Back to the start. Besides books, he also writes songs and theater scripts.

Annette describes her style as realistic, but not overly realistic. “Often with a humorous tinge.” Koss nodded in agreement. It also calls itself old-fashioned or somewhat traditional. “I don’t connect anything digitally and I don’t work on a computer. I draw everything by hand. If it’s wrong, it’s over.” It does not cut and paste on the computer. “I don’t like it either. I like to make it complete. You often see things being assembled digitally.” Coss thinks she’ll still be a bit dead after that. “Because part of the work is done by the computer. And it’s impersonal. While you see the ‘trembling’ of a line in your hand and you can see: There was someone working there.” 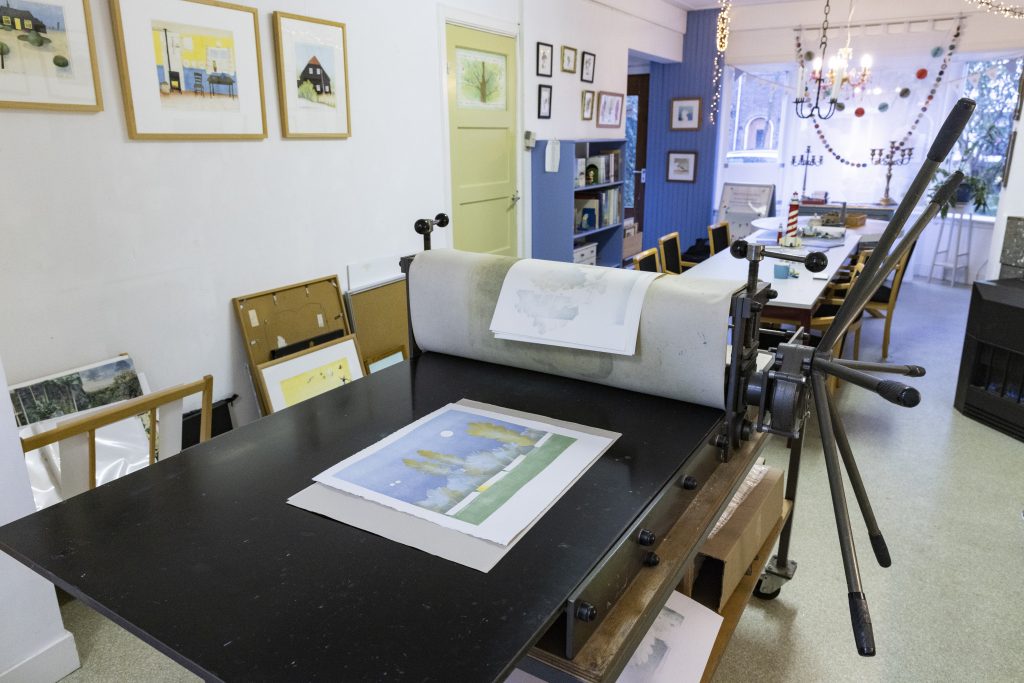 Annette uses the large press machine in the room to print her prints. “It’s actually a pattern press, but you can also print other things on it.” Although trained in lithography and dry etching, she was tired of the “rather tedious processes”. “It takes a lot of chemistry and time. And I’m very impatient. So I went in search of the easiest and fastest printing technique: stencil printing. This is the image you want to create from pieces of paper and ink and printing. You can’t print a hundred like that, because the paper is already broken.” But I’m very happy with that.” So the edition of their prints is always small: about ten. They are always color photos.

Annette thinks that when Koos and Annette work together, it’s completely different than the others. “This is a real collaboration. Usually you get a story and you have to explain it.” Their last collaboration came out in May: the Stork picture book. “While talking, we made up the story of an old stork who had already retired, but was asked for help because the stork couldn’t handle work.” Koss says the book was created “through playing table tennis.” “Once we started ping-ponged, I started writing and drawing Annette.” The second edition is out now. Now they are already working on something new: a collection of poems for adults, with stencil prints of Annette. 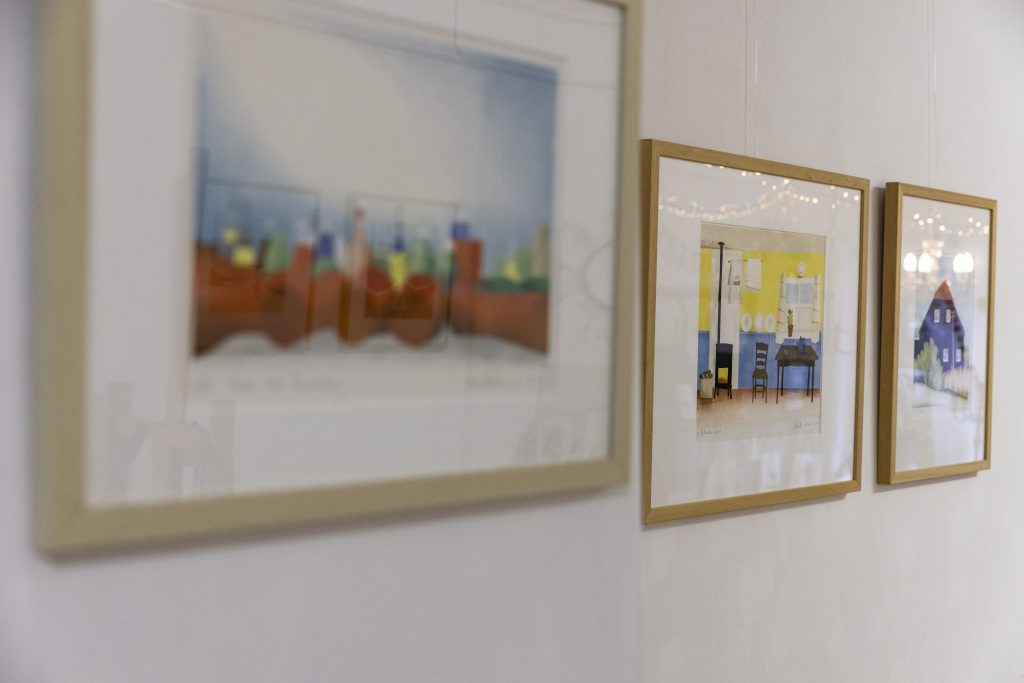 “Over the years, I’ve sometimes written a poem,” Koss says. But I’m not really a poet. It will be a start for me. I researched all the poems and looked at what I thought was worth sharing with the outside world. And Annette went looking for suitable prints.” In front of Koos is a pile of selected poems. Some on A4 paper typed, some in handwriting. Annette: “It will not be illustrations, but a collection of my prints and Koos’ poems. That could be very nice.” The collection will be called “Forever Today.” “Very nice title,” Annette says. It’s the name of one of the poems that comes back and talks about Cos’s mother. The collection is coming out this spring.

Before Corona, Koz and Annette regularly organized events in their workshops. “Room 23” is the name of one of those activities. “Then the press goes to the back and it’s completely emptied here,” says Koss. Then the room was filled with chairs. “We invited one person from adult literature and one person from children’s literature.” They talked to each other under the supervision of a friend of ours: Lynn Burgdorf. It was so much fun and we did a lot. There was also music in between.” Marek Lucas Reinfeldt and Wim Hoffmann, among others, came in. “People had to sign up and there were no costs associated with the visit. They can leave a voluntary contribution.” They also regularly organize reading evenings with fellow writers, New Year’s receptions and Christmas markets with other creatives from the neighborhood. They can’t wait for it all to happen again. 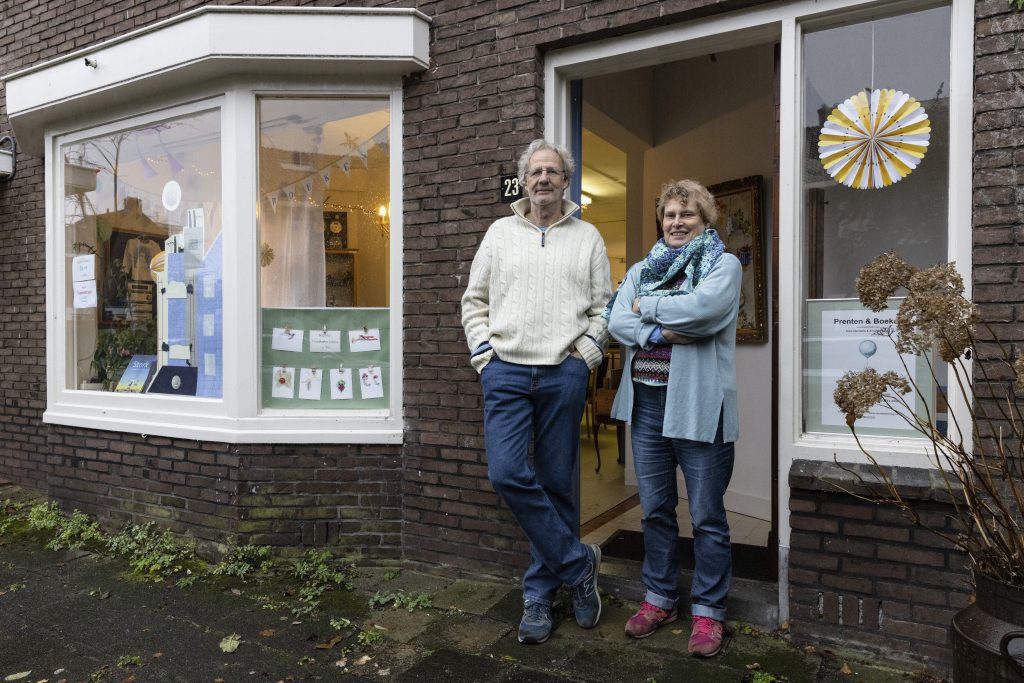 “It could have been just our own workshop, but now it’s good that it’s also just a shop. We have the space.” And Cos always loves it when people come over. “When we started this, there were still many stores in the area,” Annette says. “A vegetable seller, a grocer, on the corner a bakery, a florist, a bicycle repair shop, a washing machine and a small supermarket. Now we are the last shop in Twendorp.”

Stop at the new distribution centers? The solution is not that easy