If all goes according to plan, NASA will launch the “most powerful rocket ever” to the moon at 2:33 PM BST. The (unmanned) flight is a test mission for the Artemis program, which is supposed to bring humans back to the moon again in 2025.

The weather on Cape Canaveral, Florida looks just right for the launch. Only, before the launch, there were some technical problems that the engineers are trying to fix. NASA reports that the countdown has been paused. It is not clear how serious the problems are. The launch can be delayed up to two hours if technical problems persist.

NASA already told the news agency Reuters There was previously a problem with the rocket’s hydrogen pipeline. It has since been fixed, but if problems arise during the refueling of the rocket, the launch will be postponed to September 2 or 5. An astronaut from the space agency told BBC BBC Such technical problems are “very common”.

The rocket launch is a rehearsal for a mission in a few years as NASA aims to achieve its main goal with Project Artemis: getting people to walk on the moon, more than half a century after Americans first succeeded.

NASA launches its “most powerful rocket ever”, its Artemis I rocket, which consists of the Space Launch System (SLS) and the Orion space capsule. Orion’s capsule launch vehicle, the SLS, has been modified for over ten years. So it aims to bring people into the depths of space. With the current mission, the goal is to set foot on the moon again. After that, the neighboring planet Mars will be in the crosshairs of NASA.

The launch marks the beginning of NASA’s Artemi program, the successor to the Apollo program. The first mission is unmanned, because the US space agency thought the alternative was too risky. After all, both the rocket and the capsule are new and should be tested first. With this, the Americans, who lead the international program, want to avoid a fatal catastrophe like the one that occurred on the first Apollo mission in 1967. It also worked on testing a new capsule, but a fire broke out during a rehearsal on the launch pad. The three astronauts on board were killed. 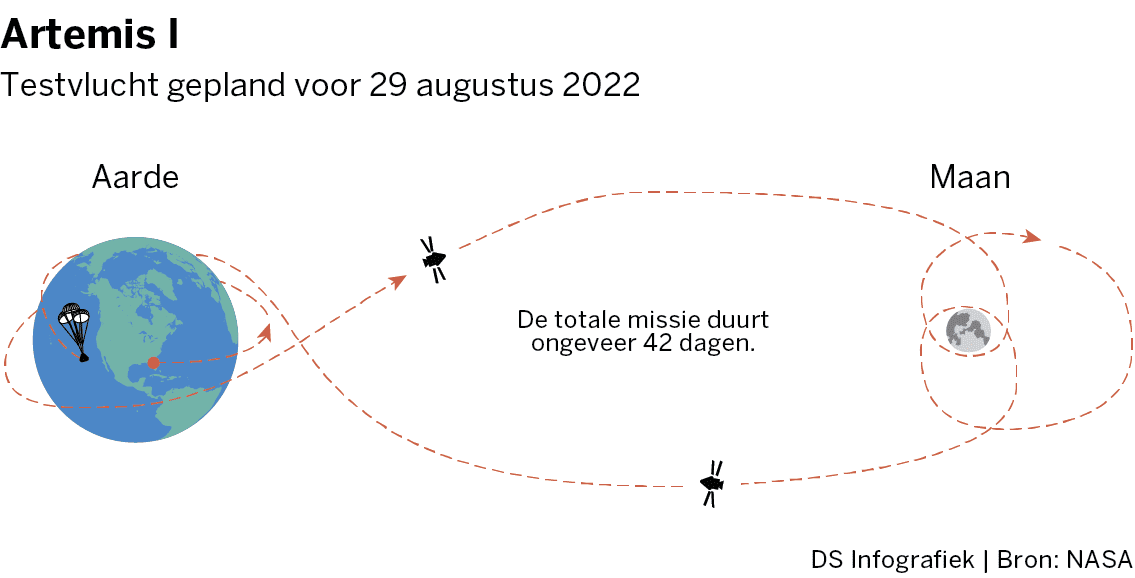 While this first version of the spacecraft will not have any actual astronauts aboard today, the Orion capsule will contain three dolls: Commander Monnequin Campos, a male doll, and Helga and Zohar, two versions of the female upper body. Sensors were installed on those mannequins that allow NASA to constantly monitor the condition of the dolls. These dolls will stay on the road for 42 days and will first orbit the moon before returning to Earth.

If this test goes smoothly, a second, similar Artemis mission will depart in 2024 with real astronauts on board. They will follow the same path as Artemis I, thus orbiting the Moon and returning to Earth. Two people will not be allowed to set their feet in moon dust again until 2025. Unlike fifty years ago, this time the men will not be white, but a woman and a person of color – both Americans. This is why the new moon program is named Artemis, after the twin sister of the Greek god Apollo.

See also  These are the 4 most expensive NFTs to date

Through the Artemis missions, the Americans want to establish their dominance in space. Unlike Apollo, the intention this time is to stay on and near the moon for a long time. Previous astronauts, such as Neil Armstrong, never spent more than a day on the moon. The first Artemis astronauts will stay there for six days.

Their successors might even build their first lunar base there. A lot can be learned on such a base, just like on the International Space Station. In addition, it will serve as an access platform for the first space tourism flight. Whether this is possible depends on Artemis’ various missions in the coming years.

This time around, Artemis astronauts will also be able to cycle back and forth between the Moon and the Lunar Gateway, a small space station set to orbit the Moon by the end of this decade. By the way, the United States and its partners are not the only ones who have plans for a lunar base. China, in cooperation with Russia, has already shown interest.

This way you can easily hide your online status

More and more clarity about the new flagship of OnePlus

Will Crown Prince William meet Harry and Meghan during US tour?

Will Kate be queen or consort wife?