Series 8 can better track your period.

The Series 8 also has a new collision detection function, which can detect car crashes through a combination of motion sensors and a microphone. Emergency contacts or emergency services are called automatically in such a situation.

There is also a Low Power Mode, which disables functions such as Always On Display mode and automatic workout detection. The battery should last up to 36 hours.

Apple Watch Series 8 can be pre-ordered starting at $399. It will be in stores from September 16th.

Apple also announced a second generation of the more budget-friendly Watch SE. Watch SE has all the essential features of the Series 8, but it’s quite affordable with a starting price of $249.

The new SE has the same S8 chip as the 8 Series, making it 20% faster than its predecessor. The Series 8 crash detection is also present on this model.

The SE is a perfect fit for the iPhone Family Setup, which allows you to set up the kids’ smartwatch using your iPhone. You can use this to track your children’s location, and new features like the Home and Wallet and Key app will be added, apparently, to open the front door, for example, at a later time.

Apple Watch SE will also be available on September 16, with a starting price of $249.

Then there’s the new Apple Watch Ultra, designed for the extreme sports enthusiasts among us.

With a titanium housing, this model can withstand the harshest weather conditions and the 2,000 nits brightness ensures that the display is always easy to read. The buttons on the side are designed so that the Watch Ultra can be used with gloves on.

The battery lasts up to 36 hours, although there will be a “battery optimization” mode later, similar to the Series 8 mode, which will likely allow it to run for up to 60 hours. 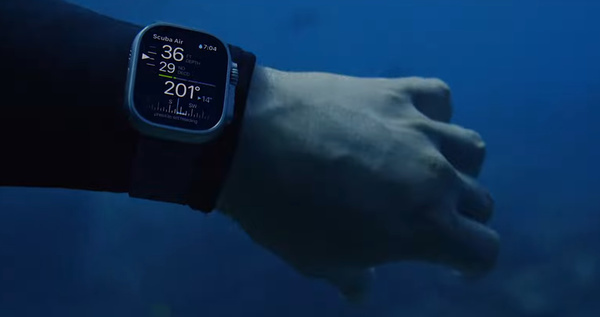 The Ultra watch as a dive computer.

The Ultra is built for adventurers, with improved GPS detection, a more comprehensive compass, and a loud 86dB emergency siren. Under water, the display automatically switches to a depth gauge, which also shows the water temperature. For divers, multiple diving computer functions are included, including multiple alarm systems.

The Apple Watch Ultra will be available on September 23 for $799.